Let’s talk dollars and cents! The Cloud Optimization Nerdpack will help you determine potential savings across your environment.

It’s your time to really impress your Executives! 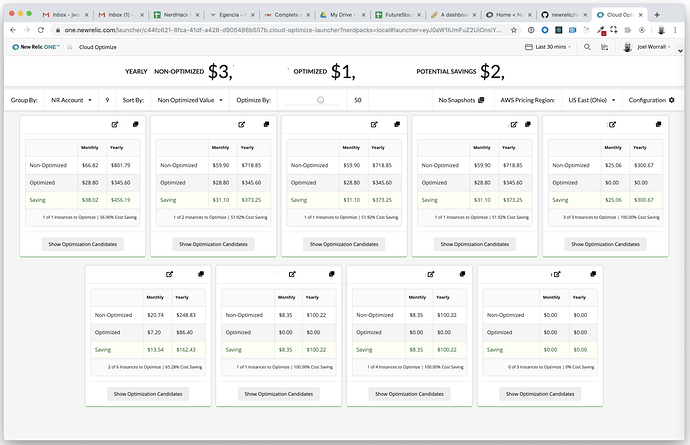 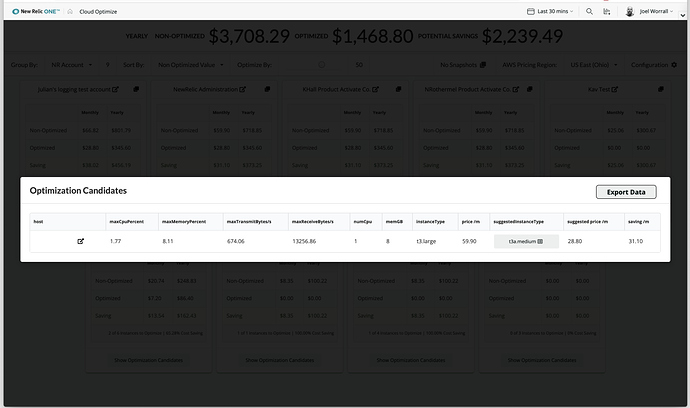 Be sure you have the following requirements listed below:

To maximize the use of this Nerdpack it is suggested you:

Clone this repository and run the following scripts:

The full Cloud Optimizer GitHub repository and ReadMe can be found here.

Hi Kav,
I’ve installed the cloud optimizer nerdpack but i can see no data as it shows 0 accounts.
I can tell this line:
const gql = {actor {accounts {name id reportingEventTypes(filter:["${eventType}"])}}}
//eventType = “SystemSample”

returns no accounts although the current account has data and it is showing up correclty on the new relic account.
I’ve tried to direclty hard-code the account id instead of calling the query, but nothing changed.

Can you confirm that the API key you have set up in your New Relic One profile (nr1 profiles:list) matches that of the account you have data flowing to?

I am getting the same thing here.
Trying to get cloud optimizer running locally, and I am just seeing “Unable to load accounts!” when I view my local running instance in NR1.

If I run nr1 profiles:list I get :
Name Region API key
my-account us
default us

So it looks like it is there.
Any ideas?

I managed to publish and deploy cloud optimizer, and I can see the data appearing now!
So it would appear that the issue is only when running locally.

I also had to generate a new UUID to get it to publish. I was getting errors like -
Error: The Nerdpack you are trying to publish was created on a different account.

I also had to add myself as a Newrdpack manager, which I was not aware of!

I’m not sure why you’d see that issue when running locally. It’s a little odd, I’ll try run cloud optimizer locally here and follow up with what I learn.

Another note is that UUIDs are tied to the API key of the user who created them. Nerdpacks are published against those UUIDs. When you publish, we’ll check that the UUID correlates to that of the API key you are using to publish.

So it is always recommended that as soon as you clone a nerdpack you should run:

Which will create a new UUID with using the CLI profile tied to your API key.

If you grab the nerdpack by using:

Then it will automatically update the UUID once the clone operation is complete.

Just finished my test - while serving locally I was able to see cloud optimise data (though numbers & details obfuscated):

So, who has deployed this and found good money to save? What and how did you find it?

Hey @tim.davis - I guess Nerdpacks are still new-ish that not a huge number of people have deployed them all, so not many have a chance to come back to you here.

I have though heard talk internally of some customers using Cloud Optimizer and finding potential savings in the 6 figure range. I have no details I can share with you on that.

Have you yourself used Cloud Optimiser? If so, what were your results like?

So, the first question is, have I had time to try to figure out NerdPacks period. The answer to that is no. As I was investigating this, I learned that our company actually has a purchased solution they use instead.

I’d recommend playing around with Nerdpacks, it was hard for me to fully understand the extendibility of the platform until I started looking at them. There’s certainly a time commitment to get to grips with React though

Hope there’s not too many strict deadlines on it all

I’m trying to deploy this “online” rather than locally, but I’m having a bit of trouble.
It was working locally last week, but then I changed the nerdpack name and now it doesn’t seem to work locally. I’ve since reverted that change so it is direct from GitHub now.

We have a Pro account and a Lite account so I think the account/API key is the root of my issue. I’m trying to use the Lite one at the moment because we only have the Infrastructure agents running on there for now:

Please refresh to try again, and ensure you are using a UUID associated to your account.

I log in the the old APM view and I can switch between accounts there, but there isn’t a switch account in NR1, should it just be able to see both accounts by default?

I’ve added each profile to nr1 and then run the following (once with the pro profile as default and again with the lite as default):

And visited the nerdpacks=local URL but I get the error message about the UUID. I got the same message when i published/deployed it to the online version aswell.

Is there anything obvious that I’m doing wrong?

A screenshot of any browser console errors would also be helpful here.

@RyanVeitch thanks for getting back on this (especially at this time of year!)

I went to get screenshots…and it seems to be working now. I haven’t changed anything though, is there sometimes a lag or something? Could my browser cache throw anything off (ie. could that be using old versions that were linked to the wrong account)?

If i wanted to run this nerdpack against both the Pro account and the Lite account, would I need to create 2 with different names, and link the UUID to the relevant account? Or is there an easy way to have both NR accounts show up on the same nerdpack?

@stephen.goodall - odd that it just worked, but you could be right, I haven’t seen any great lag with Nerdpacks before, but I have had some cache clashing.

As for running the nerdpack against different accounts, there’s no clean way to deploy once and get the data from multiple accounts.

The nerdpack will is deployed using an API key that is tied to a specific account, so it can only access data that API key can access. If you deploy to your Pro account, the API key there will not have access to the data from the Lite account. As far as I know, you can deploy to a master account, and use that same deployment against a sub-account.

But in cases where you have separate accounts, you’ll need to deploy twice. I’d recommend changing the Launcher display name, so that they are easily identifiable in the New Relic One UI, but that’s not necessary.

If you leave them both with the same name, you’ll see two identical launchers in the UI, where only one will work for the account you are trying to view.

So, my suggestion is to alter the launcher name for each deployment, and deploy both, each against the respective API key.

Once we have some data in the Pro account I’ll check that it’s all working but for now we don’t have the infrastructure agent running yet.
Thanks for your help!

No worries! Glad you were able to get both deployed