How do I add my notes or comments to the incident log?

Social components, like adding comments, are on our roadmap for Alerts.

These are more like technical comments - like what caused or triggered the alert, what was done to fix… these may be added AFTER acknowledging the alert.

These are more like technical comments - like what caused or triggered the alert, what was done to fix… these may be added AFTER acknowledging the alert.

Hey @don_bonin - I want to take a moment to clarify what I am reading here. Are you adding some clarification to what you need from this feature? If I am reading correctly you are requesting the ability to add technical comments around cause, symptoms, and actions to an Alert.

Did I understand that right? If so I’ll get this into a feature request.

You got it - just being able to save a comment on an alert event would be helpful.

Hi @don_bonin , Thanks for the clarification! As @Lisa mentioned, this is indeed a Feature Request but I gotta admit it’s a great one! I’m going to get this logged for people to review! Thanks for helping us improve our products!

was this FR already implemented?

Hey @Edwin.Renner - just to follow up here as well (thanks for pointing out the related thread!). Here’s the workaround I identified for you there:

This feature idea has not been implemented in the product. That said my colleague @ahorrigan has developed a potential way to implement user Webhooks as a workaround.

Webhooks are HTTP POST messages containing JSON documents delivered to a destination URL. When an incident is opened, acknowledged, or closed, New Relic’s webhook feature sends a message to your URL with any relevant information, such as a description of the event and a link back to New Relic.

You also have the option to customize the payload in the POST message for further integration into your system. The webhook format varies, depending on whether you use New Relic Alerts or the legacy alerting system.

With this, you would POST the alert incident data to an internal platform which can consume it, with an area where comments can be added. I understand this takes time and resources on your end - however, it is the only solution as it stands for having a comments section for alert incidents.

We also have a Level Up post in the community with more information about Webhooks if you want to try to implement this:

Relic Solution: All About Webhooks! Level Up: Alerts

What Are Webhooks? A webhook is a way to send data from New Relic to an outside platform without requiring an SDK or custom integration. In the case of New Relic, our Alerts product makes good use of webhooks. Webhooks are widely used throughout the software industry because of their simplicity. In order for this simplicity to exist, webhooks do not require a custom UI and they convey information using common standards such as JSON. The advantage of webhooks being composed of so few parts is …

Again, I acknowledge this is not as ideal as having the feature, but it may get you what you are looking for.

With the addition of New Relic Infrastructure and all of its new alerting abilities, I would really like to see a simple way to add an incident note when alerts are acknowledged.

I want to put either a root cause, outage description, notes about configuration or threshold changes.

Thanks for your suggestion @rosscampbell I can see why this would be useful. I will now create a feature request based on your input and include all of the use case information you provided.

Here is a stop-gap measure: 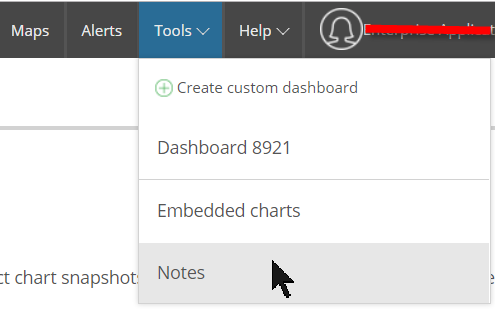 Thanks for sharing that @MTollerson!

Just adding on, this would be a great feature to have: particularly to aid communications and add comments as a team while an incident is still open.

Perhaps, this could take the shape of a third tab next Violations and Events to display a log of chat messages made regarding the incident. Attached screenshot of the current view. 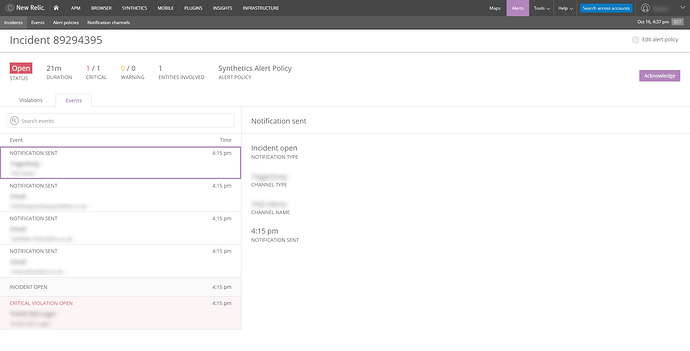 Really? Thanks, that’s great to hear!

Is there any kind of changelog available to follow recent updates made to New Relic, so I can find out when new features like these are released?

We try to keep the community here updated with these - but you can also check out blog.newrelic.com which will be updated with announcements of bigger product/feature launches.

This feature is very much needed and would be very much helpful. +1