How To: Understand the nr1.json files

For this how-to example, we will be adding access to the time picker in New Relic One to our transaction overview application and adding the selected time to the queries used in the application’s chart components.

To get started, clone the example applications from the how-to GitHub repo:

Next, we will use the NR1 CLI to update the application UUID and run our application locally. In the terminal, change into the /nr1-howto/understand-nr1-json directory.

Now, you will want to update the UUID and serve your application.

Once your app is successfully served, in the terminal, you’ll be provided with a URL to access New Relic One and see your running application.

Now on the New Relic homepage, you should have a new launcher to the how-to example.

Now that you have the application serving in New Relic One, click the launcher for ‘How To: Understand nr1.json’. You should see a 404 error page similar to the one below: 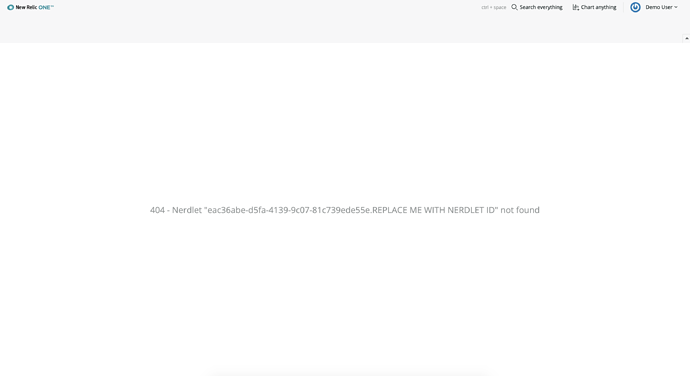 To better understand this error, open the ./nr1-howto/understand-nr1-json/launchers directory and open the nr1.json file in the editor of your choice.

This nr1.json object is the first of three configuration objects that you will find in your New Relic applications.

This object is explicitly configuring the launcher and starts by specifying a schema type of LAUNCHER and then providing the needed values for the launcher’s id, display name, description, and Nerdlet root id.

The id provides a unique identifier for your application launcher, the displayName will show on the launcher tile on the New Relic One homepage, and the description will display a user hovers the ‘i’ icon in the lower right corner of the launcher.

The rootNerdletId in the example is going to be the key to solving the current 404 error. When clicking a launcher in New Relic One, the rootNerdletId key specifies which application the platform needs to launch. In its current state, the application does not have a Nerdlet. To solve the 404 error, a Nerdlet needs to is needed, and the launcher’s nr1.json needs an update.

We need to add a Nerdlet to the ‘Understanding nr1.json’ application. In your terminal, run the following command to create a Nerdlet.

The Nerdlet nr1.json file looks a lot like the one in the launcher directory. The object specifies a schema type, gives the Nerdlet a unique id, defines the display name text that will show in the header of your Nerdlet, and the application descriptions.

For the launcher to launch this Nerdlet, the rootNerdletId in the launcher’s nr1.json and the id in the Nerdlet’s nr1.json need to be an exact match or the user will see a 404 error like the one seen before.

Let’s update the launcher’s nr1.json file making sure it has the correct rootNerdletId. Update your object with the line below:

Next, restart your server and head back to the New Relic One homepage to launch the application.

Anytime you make a change to the nr1.json files in your application, you will need to restart your server to see the changes.

You will now be able to use the ‘How to understand nr1.json’ launcher to launch the ‘Awesome Nerdlet’ seeing the screen below. 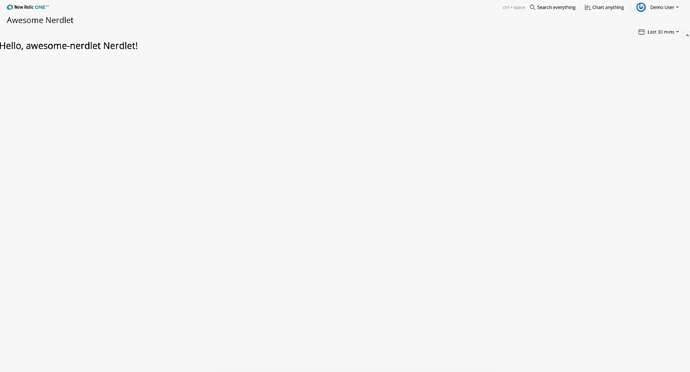 We’re going to make a couple more edits to the Nerdlet’s nr1.json file to extend the way you can access this application. Not all New Relic applications need a launcher to accessed by users. We are going to update the config object to connect the Nerdlet to an entity type.

By adding the entities and action category attributes, we have made a connection between the Nerdlet and any of the APM applications you have in your account. If you go back to the New Relic One homepage, launch the Entity Explorer, and select one of your APM applications from the Services menu. You will see the Awesome Nerdlet link in the left navigation similar to the screen below:

Now that we’ve reviewed the launcher and Nerdlets nr1.json file, we only have one more to go. In the root of the application, there is a final nr1.json file, open it in the editor of your choice.

This object handles configuration for the entire Nerdpack package specifying the schema type of Nerdpack. Every Nerdpack has a unique identifier called a ‘uuid’ shown as the id, and the display and description allow you to add details about your complete application.

How to use the NerdGraph component recap

Wrapping up this how-to example, we’ve reviewed all three of the nr1.json configuration objects in your account. And, you’ve successfully made a connection from the app launcher to the Nerdlet, and connected the Nerdlet to all APM applications in your account.

To continue your learning, take a look at our self-paced workshop on Github.