I’m trying the new service map feature but can’t seem to get it to work properly. I was able to build a small map with a few nodes and connection arrows. I saved it and later returned to the map. Now all connections (except one) are gone, and two of the nodes that were previously automatically named properly are now called “unknown external service”. I can’t reproduce the problem because when I try to build the map again from scratch, the nodes that were previously having incoming and outgoing connections available, now have no connections available. I.e. I can’t connect the nodes anymore. Why would all of this happen, and what may it be indicative of? What am I missing here?

(Also, just to let you know, Firefox 38.0.5 on Windows 7 Pro x64 sometimes crashes hard when browsing to the service map feature. I haven’t been able to reproduce it 100% of the time though so I can’t provide any more information at this point.)

Thanks for these reports! I checked in with our team and the “unknown external service” issue should be resolved at this point (a recent change was made to handle it). If you’re still seeing it, please let us know.

Thanks for the heads up on the issue with the browser crashing, @sundqvist! We’ll keep an eye out, and any more information you can get would be very helpful.

Is the problem with disappearing connections related to the “unknown external service” issue? I.e. are both issues fixed at this point, or just the latter? I do still see the “unknown external service” in maps that were previously created, and for some reason I cannot create the same map I did a couple of days ago since very few connections seems to be registering at all.

Hi @sundqvist - they are a little bit related, in that both of them result - resulted, in the unknowns case - from the way that we detect connections between apps right now. Currently the connections are based on recent data we’ve collected, and so if the apps haven’t talked recently, some of the connections you expect may not appear. Does that sound like it explains the situation you’re in?

If the apps are talking and we’re not detecting it, and we need to do some detailed troubleshooting, we can arrange to get a ticket started for you!

Not sure to be honest. I’m attaching two images that hopefully will describe our situation. The first one is from June 18th 16:00 UTC+2, i.e. Thursday before the weekend, Swedish time. 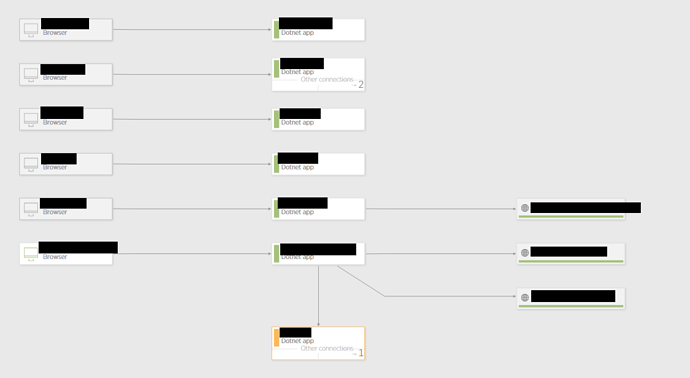 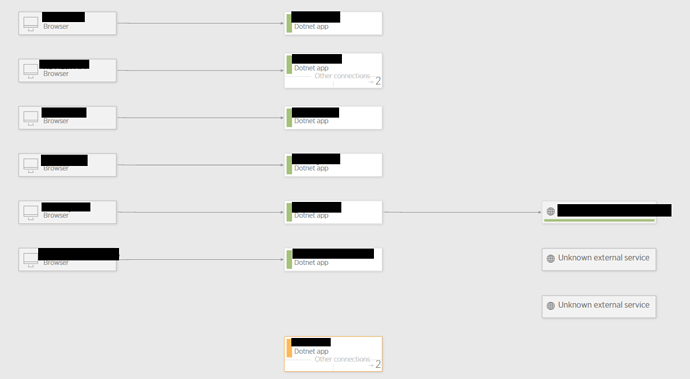 Is this behavior to be expected? Some of these entities are probably not used very much over the weekends, but that doesn’t mean the connections shouldn’t be showing indefinitely once registered, true? If Service Maps is indeed a tool to replace e.g. architecture diagrams in Visio (as claimed in one of your blog post), the connections need to stay even though they are rarely utilized (or until e.g. an architect manually opts out of showing the connection). Might I suggest some sort of color coding or value to denote hot and cold connections, with a threshold value per connection that can be specified manually?

(and I should add that now when I check the service map again, the top right endpoint is also an “unknown external service”, i.e. it is not only the last green Dotnet app in the middle column that displays the problem)

(and I should also add that when I keep the service map open, it sometimes displays an error on the form: “An error occured while fething database information for application XYZ”, where XYZ is a comma separated list of integer numbers.)

Hey there @sundqvist - since it sounds like you’re running into a number of issues, I’ll be creating a ticket for your in our system where you can provide us with some additional detail. You should receive an email shortly notifying you of the creation of the ticket. If you don’t see the email, please check your spam folder first, then let us know.