I noted while ago that some of my Transactions are being reported as the Error Code that the response returned. For example “/500/*”

This started to happen in some of our apps in which we use Spark Java to do the mappings. The problem is that I have for example the mapping “/app/login” and the transaction gets reported as “/app/login” every time the response is OK, but when an errors occurs, the transactions gets reported as “/500/*” where the number is exactly the Http Status Error. 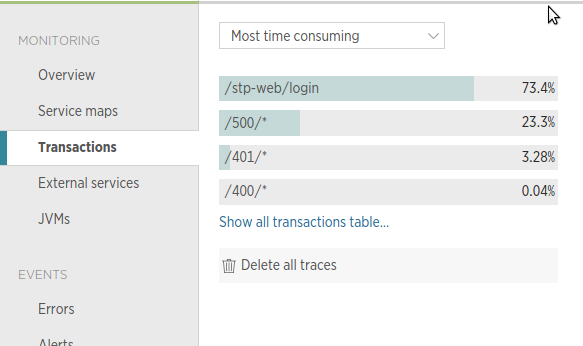 In this case I know for sure that the only transaction should be “/stp-web/login” because… is the only mapping being called.

What could be causing this?

My first thought was that maybe one of my dependencies was setting it but I searched the Call Hierarchy for the setTransactionName method and no one was calling it.

This is expect behavior as the transaction doesn’t complete as expected, but returns in error. A properly completed transaction will not be renamed to include the error code.

But why does this happen to some of my apps and to all?

Can I disable this? Sometimes we throw a 401 to tell the user that the login is wrong, and I want to measure that in the same Transaction…

I believe this only occurs when that is set to ‘false’ and URI transaction naming is in effect.

Even i am also facing same issue in my new Relic DashBoard. We are using default newrelic.yml file and by default enable_auto_transaction_naming value = true. So, i don’t think so it will change anything.

What do you mean by URI transaction naming is in effect? Can you give one example ?

@sumit.kandoi Thanks for your followup question. However @jfalleur is no longer a support engineer. I’ll see if there is someone else that can respond to your question. It may be best to open a new topic, separate from this older thread, so that it can get fresh visibility.

Thanks for replying @JoiConverse I have created a new topic for same:

@JoiConverse : Can you assign someone to look into my topic? I have created a new topic few days back since then I didn’t receive any ack from anyone.

@sumit.kandoi Our support team has been made aware of your issue. Someone will respond as soon as possible. Thanks!